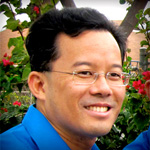 Phillip Wee, bass
Phillip Wee began barbershop singing in 1994, when he attended a show by The Sounds Of Aloha Chorus at the Blaisdell Concert Hall in Honolulu, Hawaii. The show wasn’t even over when he and his younger brother and 2 friends looked at each other in astonishment at this amazing musical art form. Within a month of that show, the 4 of them joined the chorus as a quartet and never looked back. He has sung in 4 quartets: The Tradewinds, Tropical Storm, Pacific Trades & currently Resonance. He is a long-standing member of SOA Chorus and has been bass section leader and assistant chorus director for the past 12 years. By profession, he is a graphic designer working at Hawaii’s largest marketing company.

Bobby Ing, lead
Born and raised in Honolulu, Hawaii, Bobby sings lead (melody) for Resonance.  Bobby started Barbershopping after attending a Sounds of Aloha Chorus Barbershop Show in 1994 with Phillip, the quartet’s bass.  He has served many years as the chorus’ lead section leader and previously sang in 2 well known quartets with Phillip, known as ‘The Tradewinds‘ and the ‘Pacific Trades‘.  After three quartets, he is resolved to the idea that he will never get rid of Phil.  Bobby currently works as a land agent for the State of Hawaii, assisting in developing affordable housing projects on various islands across the State for native Hawaiians.  In his spare time, he enjoys sipping red wines with fellow Barbershoppers and spending time with his wife (Ni) and two daughters, Carissa (9) and Jessica (4) who are common fixtures at daddy’s quartet rehearsals.

Tim Hopkins, baritone
Tim’s first taste of singing to an audience came from working with Ron Bright in local high school musical productions. While singing with several choral groups (at the same time), he was introduced to the barbershop art form and quartet singing, and became hooked! He joined the Sandwich Islands Barbershop Chorus (now called The Sounds of Aloha), and has sung baritone with The Tiki Tones, Classic Blend, and Tropical Nights. He’s currently having a blast singing and performing with Resonance! When he’s not singing, Tim works in the foodservice industry and can normally be found in a kitchen, working with the chef. He’s surrounded by people who love to cook and love to sing!

Jonathan Spangler, tenor
Jonathan became interested in music at an early age and sang as a charter member of the Honolulu Boy Choir in 1974. Under the tutelage of Mr. Roy Hallman, the director of the Boy Choir, and his wife Nyle who did the piano accompaniment for every rehearsal and concert, he became part of the touring choir, singing up and down the West Coast and in Mexico. He also sang in the college Glee Club and traveled to Europe and the East Coast singing a wide array of music. In 2001, he joined the Sounds of Aloha Barbershop Chorus and has sung with Tropical Storm, Pacific Trades and now Resonance quartets. Jonathan has his own computer consulting business in downtown Honolulu, and enjoys cycling and travel in his spare time.